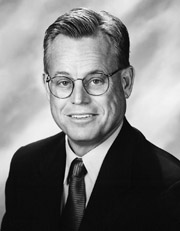 Dr. Bill Woods wasn't looking for a business opportunity-- as a successful oral surgeon in private practice, he was already being paid well for a career he enjoyed. But he was looking for a health product, and as it turned out, Network Marketing was the only place he was able to find it. He got good results, and when he realized no one was representing the product in his area, Bill quickly became interested after all....

When I came across the product I was looking for in Network Marketing, I was hesitant to use it-- I didn't trust anything I couldn't buy off the shelf in a pharmacy. I learned about it through a cold market mailing, from a nurse, which included a tape and an invitation to a presentation where a doctor would be answering questions. It was perfect timing, so I went.

After the presentation, I went up to the physician and told him it must be snake oil if he has to market it this way. He assured me that wasn't the case, of course, and gave me the names of some doctors to call who would verify what he was saying. I happened to know some of them, so I called-- they told me he was a quality doctor and trustworthy individual.

I called the nurse who'd sent me the tape and she came by my office with my order. When I saw the rest of the product line, it hit me what an opportunity I'd be passing up if I didn't get involved. For a while, I'd been wishing I had some kind of income coming in that I wasn't solely responsible for, so it captured my imagination. I decided to sign up, and two weeks later, at my upline's strong suggestion, I attended a national training meeting in San Diego. By the time I got back, I was on fire for Network Marketing and ready to run with it.

My primary challenge was the flip side of the fact that I had a wide open market for growth-- there was no active group in my city. I decided to have a monthly meeting to create some excitement about the business, so I called my upline, who agreed to come to town once a month and help me do the presentations.

I approached my friends first and they responded with extreme negativity to the fact that I'd gotten involved in Network Marketing. At first it hurt my feelings, but my wife-- who'd been skeptical herself, initially-- pointed out to me that they weren't rejecting me, they were rejecting the business. I realized that not everybody has to do this, and that if the timing isn't right, I didn't have to worry about it. I stayed in touch with people who rejected the opportunity, and now a number of the people who initially weren't interested are involved.

I wanted to make a part-time business work, and I've succeeded by simply carving out time and committing to it. As a surgeon in private practice, I had some flexibility in how I structured my day, but I couldn't spend any less than my usual 48 hours a week. I told my wife and family that I would do it six hours a week-- one uninterrupted hour a day, Monday through Saturday. To me, that meant that if I couldn't do it for a few days, I would pay any missed time back to my business. I felt I owed it to my business and to myself because I wanted to be successful.

Some people are surprised that I spend only six hours a week building my business, but with a solid business plan, anyone can do it. From the start, I devoted those six hours exclusively to prospecting on the phone or in person-- activities that directly grew the business. I got up early or used recreational time for reading and educating myself about the product line and the industry.

I use an organized card file system for keeping track of all of my prospects and write down any information they give me or questions they ask on their card so I'll remember. If I tell someone I'm going to get back in touch with them in tomorrow at 4:00, or in two days or in two months, I keep my word. That shows people that I'm professional and accountable.

Spending consistent time and using a consistent method makes all the difference. If someone in my group says he's going to make three calls a day and he does, regardless of what the results of those specific calls are, I consider him successful. If he feels like he's succeeding each day, he's going to stay in the business long enough to be a success.

What has helped me keep my commitments is my belief-- in the products, in the industry, and probably most importantly, in myself. I knew that I was going to be successful and leader of the organization in my community. I researched and believed in every product, and, through studying the industry, truly came to believe that Network Marketing is the best way for a company to deliver products to consumers. My strong belief in these three areas enabled me to feel confident in prospecting anybody-- I wasn't nervous or intimidated about approaching people.

Attending the national event so soon after starting had a huge positive effect on my belief. I met people from all over the country-- physicians, lawyers, businesspeople, airline pilots, homemakers, teachers-- and I realized I just needed to recruit a few good people and develop a duplicatable system. I came back not only excited about my company but excited about the industry. I recommend that every new person attend such an event as quickly as possible.

Another thing that helped me stick with it was finding three or four key people early who shared the same vision I had-- they were in it for the long run, whether they were successful right out of the gate or not. We became close friends, and I think one of the keys to our growth is that we really enjoy working together and have a strong support group for getting through challenges or rejection.

My philosophy for Network Marketing is the same as for my oral surgery practice-- to treat everyone I meet as if they were a member of my own immediate family. How would I approach them? With care and honesty. I'd only do what was best for them, and that's the way I try always to treat people in my business. In the long run, I know that our relationships will be stronger for their knowledge that I have their best interest at heart.

The best thing for me about Network Marketing is the relationships I've built. These relationships are more genuine and caring than any I've ever experienced in a business context. I know that if I had a personal problem or a family problem, there are so many people now who would be there for me, as I would be for them. We've developed real friendships. And we're having fun!

DR. BILL WOODS has been an oral surgeon for 20 years. He is also a part-time distributor with Rexall Showcase International, Network Marketers of nutritional and preventive health care products. He's been with the company since August 1997, and is currently a Diamond Director and Century Club Elect. He lives with his wife, Janna, in Springfield, MO.