Ask, 'What Can I Do Today?' - Dale Brooks of AmeriPlan

Dale Brooks came to Network Marketing in a state of serious financial trouble. He'd been laid off three times from corporate jobs as a computer programmer and was searching for any way to make ends meet. He tried insurance and a few other things, but with little success. By the time he found Network Marketing, his finances were a mess and his wife was getting scared. He was desperate and determined to build a successful business. Now, six years later, Dale's troubles are long over and the future is bright... 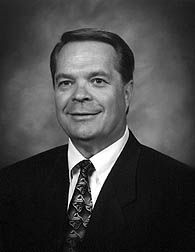 In the first couple of years, we were just figuring out what we were doing and how to be unique. I was introduced to the business by an acquaintance. He was the first broker with the company, I was the second, under him. After about a year and a half, he quit-- I guess he didn't have the vision to get over the rough parts of it. Had he remained with the company, his income right now would be about $175,000 a year just because he brought me in.

The biggest challenge for me was the big unknown. A lot of us came to work in the beginning strictly on faith. We just felt the company was going to work, but it's hard when you start something brand new and so many people say, "Well, I'm gonna wait and see if you're successful. If it is, then I'll come on board and work with you."

In the early years we were hands-on with everything. We'd get our sales literature printed up, collate it by hand, develop our broker kits and training materials, and spend a lot of time developing our training classes. This was on top of actually going out and enrolling new members and brokers to make a living.

About halfway through our second year is when we really started taking off and making a profit. From then on it was just a matter of how quickly we could expand and grow.

To me, the most important key to success is knowing the answer to "What is your purpose? Why are you doing this?" I believe in goal setting, but this takes it a step further. I think that if you put the goal "I want a new Cadillac" up on your refrigerator, you're never going to get a Cadillac. You've got to know why you're going to get a Cadillac. When you experience fear of what other people may say, what's going to get you up the next morning going out and doing it? Your purpose. Is it that you want better for your children? Is it that you want to get out of debt? It's only the deep emotion that makes you push on. If I can find out what is going to truly motivate someone new I bring into this business, I've got a great chance of helping make it happen.

After I had been laid off by the corporate world three times, I couldn't get a job. My wife was working to help support us, and I was trying to do insurance, but we were in real financial trouble. I got my purpose one night when we were lying in bed, and I heard her crying. I kept asking her what the matter was, and she finally rolled over and said, "Well, to be honest with you, I believe in you, and I know that someday you're going to find what you want, but I am always afraid of becoming a bag lady."

The next day, I wrote a big note in my daytimer: "Bag lady." And from that day forward, every time I opened my daytimer, I looked at that, and my resolve, my purpose, was that my wife was never going to be a bag lady. My attitude changed completely and so did my business. I was focused and determined.

Now that we have a great income, my purpose is still the same. Until I have taken the income I've earned and built up a reserve-- a nest egg big enough that if something were to happen to me, she'd still be taken care of-- I'll get up and go to work every day.

There's only two things in Network Marketing I think you can control. The first is attitude--that's why it's so important to get people to write down their purpose. It helps them maintain their attitude through hard times. The other is activity. You see, if I bring somebody new into this business, I can't determine if they're going to work hard or not. I don't have any control over that. What I can control is my own activity. How many appointments do I have in a day? What am I doing?

In other words, I can't depend on anyone else to do this. No one else has my purpose. If people tell me, "This isn't working," the first question I ask them is, "Great, let's see your calendar. How many appointments have you had this week?" Unfortunately, I soon find out that many of the people saying, "Man, I'm workin' hard," have only talked to three people. No business is going to be successful unless you have massive activity in the beginning. That doesn't mean you have to talk to 50 people a day, but four or five every day. It will just amaze people how much their business will grow if they do that consistently for 90 days straight. Most people won't.

I was mentored to become successful, and that's my philosophy: When I bring people in, I'm going to mentor them, too. I'm going to do everything I can, but I tell them, "Every night when you put your head down on the pillow, ask yourself, did I add names to my business today? Did I do something that increased the chances of my business becoming successful?" We're all independent, and if they answer "no" three days out of the week, I tell them they're in trouble. It's got to become a habit, and if you get people to do something for 90 days, it's a habit they will continue.

When I sponsor people, the first thing I want to do is make them a friend. If I've got a friend, then I've got a better chance of making them successful because they'll know me-- they'll know my sincerity. I'm there for people, even if they're not having success, because that's what a friend does.

I probably go a little overboard in that sometimes because I tend to believe in people even after they've stopped believing in themselves, but I just want to give them everything I can. The downside is that it hurts a bit when you get close to someone and they don't make it, but at the same time, I've got an awful lot of people that are very successful because I stuck with them until they could do it on their own.

The best thing about Network Marketing in the first few years was just getting financially stable again! Now I have more friends than I ever thought one person could possibly have. There is not one part of the country that I can't go into right now and call somebody up and know that there's a friend there. I love people and I love having friendships. Every time I bring somebody new into the business, I grow. I learn a little bit more about life. And that's a whole lot of my reward.

DALE BROOKS is a full-time National Sales Director with AmeriPlan, Network Marketers of a non-insurance dental, vision, and perscription drug benefit package for individuals and small to medium-sized businesses. He's the second-highest earner, president of the Field Advisory Board, and has been with the company since 1993. Dale and his wife Donna live in Fort Lauderdale, FL.