There's No Obstacle Too Big - Mary Lou Wilson of Enrich

If there's one word that best describes Mary Lou Wilson, it's "unstoppable." She's someone who has succeeded beyond most people's wildest dreams in every business venture she's ever set her mind to, and not without her share of serious challenges. Mary Lou even recently attracted the Wall Street Journal's attention by launching her Network Marketing company into the Japanese market to the tune of $7 million volume per month and rising. As Mary Lou will tell you, though, she started like so many others as a parent of young children trying to contribute to the family's bottom line. . . .

When I first got into the business, my upline never explained Network Marketing to me. I simply saw it as a great opportunity to buy wholesale and sell retail. I never sponsored a single person, but I was moving $10-12,000 dollars of product a month. At the time I got involved, I was a full-time mother, but I had previous business experience as the owner of one of the biggest Saint Bernard kennels in the world. I showed dogs, imported and exported them, and was a very successful breeder for a number of years.

Eventually, that company went out of business and I ended up learning what Network Marketing was really about from a colleague of my husband, Bob. Bob was a captain with American Airlines, and one night another captain came over and told us about a company marketing a product by Texas Instruments-- a very early version of the home computer. When he explained Network Marketing to me, the light bulb went off immediately. I thought, "This is unbelievable." 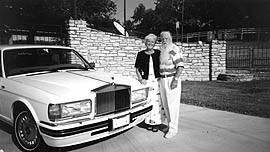 I got started with that company and built a downline of 19,000 distributors, even though people thought I was bizarre to be marketing technology. That was just not something women were doing in the Seventies.

I went on to be a top distributor with a number of other companies after that one went out of business, but the same thing kept happening-- I'd succeed, only to have the company shut down. In the last one, I remember getting my check up to $67,000, putting it in the bank, and four days later receiving a notice that the company's account had been closed.

At that point, I said to my husband, "I can't handle it, I just can't do it anymore." It hurt me for the company to shut the door on people who'd believed in me. I made a decision never to do Network Marketing again.

I threw all my lists away and I went to work with a trust company giving seminars on retirement. I rose to the top there, bringing over a $100 million in investments to the company in my first year. The compensation arrangement was to be paid once a year, and when it came time, they had problems with the banking and I lost it all. Fortunately, my husband had a wonderful job and earned an excellent income, so it didn't "hurt" me per se. I realized that the same thing can happen in any kind of business.

I decided I'd retire because my husband had retired, but then one of our daughters became ill and had no insurance. She needed treatment for nine months, and it cost $30,000 a month. I remember praying, "Lord, you need to bring something into my life to replace the retirement money we're spending."

The next day I got a phone call about Enrich from an acquaintance, Ken Pontious. I said, "I will never build another Network Marketing business. I threw out all my lists, so I'm not a heavy hitter anymore."

Knowing I'd done some industry consulting, he asked me to just take a look and give my opinion, so out of professional courtesy, I agreed. He sent me the plan and the product, and although I thought they were both great, I still fought getting involved. I was not a healthy person at the time, so I started looking at the rest of the product line to see if any might solve my problems. I became fascinated with natural healing and did a tremendous amount of studying to be sure I was giving my family what was best for them.

Soon, people started noticing the change in my health and the word spread. I never ran a single ad, and I lived out in the country, but people would find my house and say, "Are you the herb lady?" They began to buy products from me, and after about eight or nine months of those numbers steadily increasing, I couldn't deny it anymore and got back into Network Marketing full swing.

To this day, I have never done a recruiting meeting for my business and I have over 100,000 distributors in my organization. I've spoken at meetings for others-- I never deny support for people who want it-- but I have personally built one person at a time. At this point, my organization is so big that I don't even do that anymore. It's very rare that I personally sponsor now. I go out and talk to people still, if I'm in a restaurant or a store or an elevator, but I give all of my leads to my downline. I want to encourage those people, and of course I'll always help them. I want them to attain what I have if that's what they want.

I'm still a goal setter, and no matter what it takes to get it done, I do it-- as long as it's with integrity and honor and character. I don't let anything get in the way of making my goals reality. There are no obstacles that I believe I cannot overcome. I proved that when I launched Enrich in Japan. You have no idea how many obstacles I ran into with the company, with government officials, with distributors, with the language barrier, with the different culture, but I never lost sight of my goal. I wanted to open Japan, and whatever it took, I did to make it happen.

One of my smaller, recently realized goals was to get a Rolls Royce, but my primary goal now is for certain people in my organization to have what I have, and I'm working very hard to make sure that they get it. My goals now all pertain to others.

I'm not one of these people who believe that success means you don't have to work anymore. I think that takes advantage of people in your organization. When you bring people into the business, you have a duty, a responsibility, and an obligation to help them be successful. There are already many people in my organization earning well over a $100,000 a month and I've taught them that they have to go out and help other people to do that, because you lead by example.

The best thing about Network Marketing for me is the people I've met in this business. There isn't any other industry in the world where you meet so many people and make so many friends that touch your heart and whose hearts you can touch.

My husband had cancer in February, and although I only let a few people know, the word spread. Soon there were hundreds of bouquets, and so many thousands of cards and letters from all over the world that the post office had to make a special trip to our house with a truck big enough to carry ten huge bins of mail. A doctor in my Japanese organization drove 25 miles every single day to a special shrine to pray for my husband.

This is how you touch lives in Network Marketing. These people are members of my family.
MARY LOU WILSON is a full-time Sapphire Presidential Director with Enrich, Network Marketers of nutritional and personal care products. She has been with the company since January 1991 and involved in the industry for 25 years. The Wall Street Journal story about Mary Lou appeared in the July 16th "The Frontline." Mary Lou and her husband Bob have three daughters, two granddaughters and one grandson. The Wilsons live in Grandbury, TX.