With No Warm Market, I Hit the Streets - Laura Kall of Big Planet

"I was away at college when my parents started with NuSkin," Laura Kall remembers, "so I really didn't see them get involved in the company or what they were doing day to day to build their business. What I did see was a huge difference in the size of the checks I'd get when I called home for money." Laura had been thinking about going into traditional business, but by the time she was leaving college, she'd seen the merits of Network Marketing and decided to go into a business she could build herself. She graduated at the top of her class in May and started full-time in the industry June 1st. That was 1988, and she was 22. Now a married mother of two, Laura is a millionaire and as excited as ever about her business...

I interviewed for jobs in the banking and finance industries, but I couldn't believe the low starting salaries most jobs were offering - colleagues of my dad's in Network Marketing were earning more in a month. That's when I started to question the traditional business world. I hated the thought of being told what my income potential could be. There really weren't very many young people involved with Network Marketing then, so it hadn't seemed like a real option before, but I started to see it differently. I'll never forget the night I went to a NuSkin meeting with my dad for the first time. As I was listening to him speak at the front of the room, I was enthralled - the concept was so exciting and I totally saw the vision.

When we got home from the meeting, I said, "I've decided what I want to do with my life - I want to become a distributor." My parents were excited and supportive, but also realistic. They asked me, "Who are you going to go to? You can't go to any of our family and friends because they already know about the business. Most of your friends are going to law school or med school, so they're not going to be at the right time or place in their life for a business. Who are you going to go to?"

I said, "I don't know, but I'm going to figure it out. This is the business I want to be in and I'll talk to anyone and everyone." 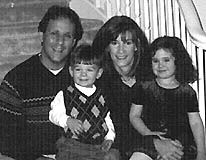 I spent the first month reading and talking to my dad about the business. He advised me to try to think like a 40-year-old-someone who's been in the work world - so I would be aware of what their hot buttons would be. He advised me to elevate my expectations and expand my prospect pool beyond people my own age.

It took me a while, a good six months, to learn the difference between quality and quantity. I learned the hard way that I couldn't be in the business to save the world; I eventually figured out that I had to look for people who wanted this business, not waste my time with people who were being convinced by me to do it. I learned that you can say the right things to the wrong people, but you can't say the wrong things to the right people - it's looking for people who are at the right place in their life to do this business.

Still, within my second year in the business, I was at the highest level, Blue Diamond Executive, and when I was in my mid-twenties, I was recognized as the youngest member of the company's Millionaires Circle.

I had to build my organization almost entirely from the cold market. I did find four warm market people to sponsor - my boyfriend, the owner of a jewelry store I'd worked in, my best girlfriend from childhood, and my second-grade school teacher - but besides them, I literally built my whole business with cold contacts.

I used two prospecting methods - what I call "walking and talking" and situational prospecting. Situational prospecting still involved strangers but there was some kind of rapport - on the train, in a store, at the gym, you name it. "Walking and talking" meant going up to every single person on the street who looked like a good prospect to me, tapping them on the shoulder and saying, "Excuse me. I know this is going to sound totally crazy and I know you don't know who I am. My name is Laura, and I'm expanding a new company in the area. It's going to be one of the largest companies out there, and if you're open-minded to hearing about a very lucrative business opportunity, give me your business card and I'll call you and give you all the details." I called that my power line, and I'd just repeat it over and over throughout the day.

It was very random, except that I'd usually go after people who looked successful and were well-dressed. Sometimes I'd be running alongside them in Grand Central Station as they were rushing to make a train, and there were times when I had people curse at me and tell me to get a real life. Sometimes I'd suddenly think, "What in the world am I doing?" Here I was, just out of college with all the "best" job opportunities, stopping strangers on the streets of Manhattan. I'd keep going, though, and by the end of my first year I'd sponsored 120 people that way.

For prospects generated from either method, I'd have three scheduled presentations in different locations each week for them to come to, and sometimes I'd also meet with people one-on-one if they couldn't make one of the meetings and I liked them. A lot of my business was based on just a gut feeling about the warmth of their voice or my sense of their personality.

I don't encourage a new rep to do the "walking and talking" method to start off with because it's not duplicatable for everyone. Instead, I encourage new representatives to go through their warm market, ask for referrals, and as they become more comfortable with the business, branch out into situational prospecting.

I've learned that you can't motivate an unmotivated person, so I work with motivated people. That's how I managed having 120 frontline people that first year - I put the majority of my energy into the people who were calling me and showing excitement.

It's the same when you're prospecting. My only goal when meeting somebody is finding out if they're at a point in their life where they're open to learning about a business opportunity. If they're not motivated, if they're not looking for something, the business itself doesn't really matter.

I still actively sponsor today, even though I could retire without changing my lifestyle. What gets me working today is the pioneer bug - I've always loved what I do, but I'm thrilled to be involved in the early stage of the internet revolution. I took time off for a few years when my daughter was born, but I'm back in the trenches now because I'm so excited about it.

Where else in the world could I find a business that would allow me to earn millions of dollars around my own schedule? I live a balanced lifestyle. I have a four-year-old and a two-year-old, so today I build my business around my children's schedule. A lot of women feel very torn between wanting to have a family and be home with the kids but at the same time have something for themselves, wanting to have a business and stay in the work world. With Network Marketing, I'm able to have both - the freedom is an amazing thing.

LAURA KALL is a top earner with Big Planet, Network Marketers of internet service and products. She has been in the business since 1988, and lives with her husband, Mitchell Felton, an investment broker, in West Port, CT, with their two children, Jessica, 4, and Cameron, 2.