"I Used to Own a Bakery; Now I'm Rolling in Dough" - Michael Kahn of International Teamworks, Inc.

The entrepreneurial life was business as usual for Michael Kahn, and traditional business had brought him great success. After building his sourdough French-style bakery into a local landmark in Chico, CA (with 50 employees and earnings over $1 million a year), Michael was ready to move on. He sold the business in 1997, traded a few commodities, invested a few stocks, and enjoyed being home. There was certainly no reason to rush into anything new, especially not Network Marketing... 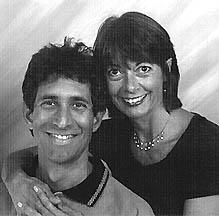 I was in traditional business for myself most of my working life. I've never been in MLM prior to this company, although I bought products from Networking companies. They have great products, but I'd never tried to do the business. I had sort of an arm's-length attitude toward Network Marketing.

It was my sister, Georgia, who said, "I want you to look at this opportunity." She's been in lots of Network Marketing companies and likes to show them all to me. I always said, "That's very nice, but I don't do Network Marketing."

This time, she got me on the phone with the president of the company, who is a multi-millionaire. He was, like me, from a traditional business background and had been making over $100,000 a month doing investment tax strategy seminars. He left that behind in order to become part owner of the company, and he and the other three owners get paid as representatives. They don't get salaries.

I was being offered the opportunity to get paid the same way as the company owners. That really impressed me, but I honestly thought I was going to be able to pick it apart. I'm pretty good at analyzing and finding any loopholes in a business opportunity. No matter how good it looked at first glance, the opportunity was still Network Marketing, so I expected to find something in it that wouldn't work for me. The closer I looked, though, the better it was.

The four company owners also impressed me with their ethics and integrity. In fact, I'm still impressed by them, and it increases as I get to know them better. That wasn't what I was expecting in a Network Marketing company.

To be honest, when I first joined, I thought, "I can find two other people who want to make some money, and then just go on about my business." Then the checks started coming, the basic weekly checks. I saw that if you get more than two representatives, the checks get bigger. You make good money if you get only two new representatives in, but you make better money if you keep enrolling. I decided to keep enrolling.

I didn't face challenges signing people up at first, but I did have people who were not growing the business themselves. I had never been around Network Marketing, so I didn't know at first who to sign up, how to help them, or what to do. I just figured they would go do what I was doing.

I was contacting people personally, explaining the plan personally, and doing all my own work. It wasn't duplicatable. My high-effort full-time method wasn't anything a prospect could see himself doing, so it wasn't working.

The company also faced challenges initially in a product provider who couldn't keep up with the growth. We were signing up more than they could handle. I had some of those challenges transfer into my downline as frustration.

My job was to promote staying power in my team to get over the hump of frustration with our inadequate product provider. With the provider/product challenge, the company handled the resolution by letting everyone know the situation and by finding better services and prices to replace what wasn't working. My team simply had to wait it out without dropping out, and it was my responsibility to keep them together.

I use the voice mail system to keep in communication, so I kept my downline informed about new products and customer service. They could quit working, if it got too frustrating at any point, without dropping out of the company. When they heard my message that the provider challenges had been solved, they started working and enrolling again. After that, it just got better. It didn't take much to get people back and going again since the plan is simple and duplicatable.

The real key to my success came this year in the form of truly duplicatable tools to replace my high-effort methods. In 1998, we didn't have a video to explain the company. The video and three-way phone calls are duplicatable, as are our conference calls with leaders around the country. The video is a qualifier, so no one has to spend the amount of time I was spending with each prospect initially.

When my downline representatives started showing the video and setting up three-way calls with me and any interested prospects, they showed confidence in a simple set of actions. They can be very positive about what they are doing because it's easy and comfortable, and prospects recognize that. Prospects can envision themselves doing the same things and earning money for their effort.

My success philosophy is that you achieve what you believe and attract what you put out. If you have a positive attitude, no matter what the scenario is, you will attract a positive result. This is what I told people during our provider challenges. You can focus on the problems, or you can focus on the solutions. You can have a bad attitude or a good attitude. You will get more of whatever you focus on. There's a certain man in the Bible who says, "As you believe, so you receive." Whatever you focus your attention on creates a magnet which attracts similar people, attitudes, and results.

The best thing for me about Network Marketing is being able to provide a fulfilling experience. People are able to put their trust and faith in the opportunity and see their dreams become reality. That's especially important for those who have failed in this industry in the past. Everyone can make it in this company. Everyone can follow their dream to success and a residual income.

The more I've been able to help other people, the more I've seen people's lives change. The more I've heard stories of "I've tried everything else and not made it," the more rewarding it's been to see others succeed. I'm proof that anyone can make it to the top.

MICHAEL KAHN is full-time with International Teamworks, Inc., Network Marketers of various telecommunications systems. After only 16 months in the business, Michael has achieved Top Gun and Most Valuable Player positions, the highest in the company plan. He lives in Chico, CA, with his wife, Karen and two sons.