What is the Theory of the Auto Responder?

Auto Responders are simply timed email series that you can set up.

For example, the first email goes to the prospect the day they are subscribed to the series. This is usually set up on the system to happen automatically upon them filling in a survey.

After that, you can decide a time interval until the next email is to be delivered. You could say send the second email 2 days after the first, then the 3rd email a week after the second and so on.

We recommend writing the emails in a friendly tone as if you just sent them the email directly to them and them only. Believe it or not, many will not even realize it is a machine following up with them if you write your emails this way.

We like to stick to a timing of approximately, Initial Email, 2 days later, 5 days later, 1 week later, 2 weeks later, 1 month later, 2 months later, then every 3 months for as long as a year.

Select the language this series is going to be in so as to have the correct encoding set. and hit add!

You now have a "bucket" to put your emails into.

Click the Edit button beside the series you wish to add an email to.

Click the Add Button or if you are editing an existing email in the series, click the edit button. 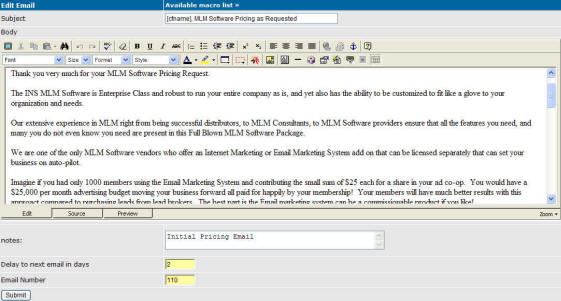 Add your Subject and body in the available editor. We recommend writing your emails in notepad then pasting them into the editor as this is an online tool, and if you spend all your time writing it, then have a power failure, or any other catastrophe, you will lose your work!

At the bottom, you will see a few important items to fill in. Delay to next email is how many days you want to wait until the next email is going to go.

Email Number is the number of this email. emails are sent in Numerical Order, we recommend making your first email 100, then 110, then 120 etc. This allows you to easily ad emails in the middle of the series as necessary in the future.

You can add as many emails to the series as you like, there is not limit.